I might be able to pretend that certain things have never happened. But, that I’ve read this book will never make that particular list. 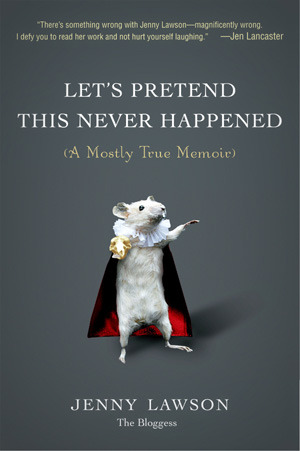 Jenny Lawson realized that the most mortifying moments of our lives—the ones we’d like to pretend never happened—are in fact the ones that define us. In the #1 New York Times bestseller, Let’s Pretend This Never Happened, Lawson takes readers on a hilarious journey recalling her bizarre upbringing in rural Texas, her devastatingly awkward high school years, and her relationship with her long-suffering husband, Victor. Chapters include: “Stanley the Magical, Talking Squirrel”; “A Series of Angry Post-It Notes to My Husband”; “My Vagina Is Fine. Thanks for Asking”; “And Then I Snuck a Dead Cuban Alligator on an Airplane.” Pictures with captions (no one would believe these things without proof) accompany the text.

If I’d ever thought my own upbringing was particularly traumatic I would have stood corrected after reading this book. I never had to face a Stanley, altthough a few taxidermied animals were present.

This is funny, and irreverent, and rash, and loving and so not for people who are easily offended. She writes “fuck” more often than anyone I’ve ever read, and she has me laughing all the time.

Jenny Lawson has issues. She can put a lot of the alphabet after her name, like OCD, ADD, rheumatoid arthritis and more. The book has them all, but the author never goes out to make you feel sorry for her for all of this. Instead she lets you in on the absurdity of it all as well as both the good and the bad.

I also love her discussions with her husband Victor. My discussions with my wife, although we sometimes feel we come from different planets too, aren’t half as hilarious as the ones Jenny and Victor have. Still, I have explained to Kristin that Jesus was totally a zombie.

So, if you love life’s absurdities and isn’t too easily offended, this is a book for you.

Jenny has a quote from Neil Gaiman on her blog (The Bloggess), which I think sums it up quite nicely. Oh, and you should read the blog too.

“The Bloggess writes stuff that actually is laugh-out-loud, but you know that really you shouldn’t be laughing and probably you’ll go to hell for laughing, so maybe you shouldn’t read it. That would be safer and wiser.”
-Neil Gaiman, author of The Sandman, Stardust, American Gods and Coraline